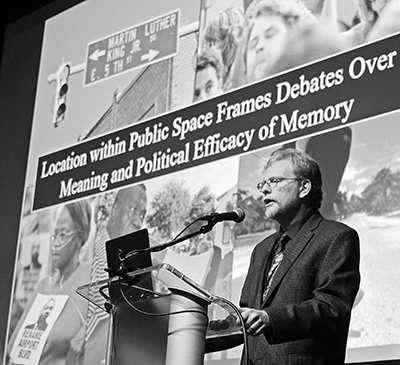 Alderman at Virginia Tech as part of the post-Charlottesville call for universities to develop policies for addressing the commemoration of white supremacy within their campus landscapes.

As President of the American Association of Geographers (AAG), Derek Alderman, professor of geography, spent the past several months traveling across the United States speaking at various geography departments, programs, and academic conferences. He called on geographers to enhance their level of public engagement, communication and media savviness, and skills in advocacy and disciplinary promotion.

“Many geographers are already experienced in outreach, and doing it well, but there is room for even more geographers to leverage their research, teaching, and other professional practices to advance the discipline’s place within public thought and debate,” Alderman says. “The ideas and skills of geographers have always been important and needed, but they are especially in high demand in these turbulent political times of climate change denial, unsustainable planning, and ever-widening social inequalities.”

For this discipline, in particular, educating and collaborating with civic groups is critical to promoting what geography is, why it matters, and for whom it matters. Without a strong pubic identity, geography cannot hope to reclaim a position in the state public school curriculum, recruit the very best students to major in geography, or exert more influence over major questions and issues facing the world.

More broadly, public outreach is foundational to the mission of land-grant educational institutions, such as the University of Tennessee. Being engaged goes beyond sheer accountability and providing taxpayers a return on investment. A larger ethics of care and responsibility for people, places, and environments should drive the engagement within and outside the academy. This ethics of care sometimes requires geographers to be seen and heard during times of controversy and use their scholarship to inform public debates, even when that requires stretching beyond a level of comfort or standing against some public opinions.

Being open to “stretching” is an apt for capturing Alderman’s own public engagement background and experiences, which have focused on working with journalists, policymakers, tourism entrepreneurs, and activists on the racial politics of southern public commemoration. A broadly trained cultural and historical geographer, his PhD program at the University of Georgia—like most universities at the time—did little to prepare him to assist public groups, communicate scholarship to non-scientists, or interact with the media.

“As a white southern male, I seemed to be the most unlikely of people to talk about bringing greater justice to the representation of African American heritage,” Alderman says. “Yet, I have used my positionality to gain access to and educate audiences in some unexpected ways—always striving to speak in solidarity with rather than for communities of color.”

While his initial training in public outreach was less than ideal, the situation is thankfully changing and geography students at UT—both undergraduate and graduate—are picking up valuable engagement skills and experiences. Students are writing op-eds, producing podcasts, organizing their own conferences, collaborating with government agencies, historical sites, and community initiatives, delivering talks at local area schools and civic groups, and conducting research with social and environmental policy implications clearly in mind.

In October 2017, doctoral student Jordan Brasher and Alderman traveled to Virginia Tech to lead an invited teach-in on the removal of Confederate and other racially insensitive place names from campus buildings. Virginia Tech, like a growing number colleges across the United States in the wake of the Charlottesville tragedy, are searching for recommendations for how to study, contextualize, and even challenge landscape symbols that glorify white supremacy.

“The rewards of public engagement go much farther than bringing recognition to UT or putting professors and students in the spotlight,” Alderman says. “With every moment of public outreach comes an opportunity for the geographer to listen, as well as speak, and to learn about the world from someone else’s point of view.”

Over the past 20 years, journalists conducted more than 200 interviews with Alderman, including a recent appearance on the NPR program, 1A. During that time, he learned about important commemorative and cultural struggles across the nation. He also learned how to translate his research about memory, race, and the American landscape to larger audiences who may or may not know what geographers do.

“This forced me to clarify my arguments, be keenly aware of the ethical and political consequences of the ideas and research findings I offer, and humble me to the complexities of addressing real world struggles and inequalities,” Alderman says. “Overall, I believe public engagement has made me a better geographer and a better human being.”