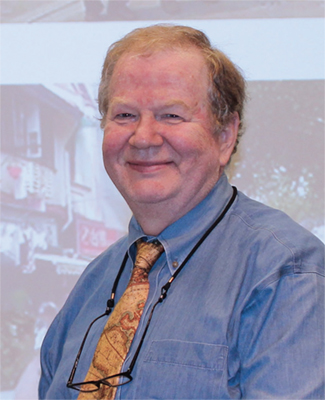 Tom and Janet Ralston and Bruce and Linda Ralston believe in supporting efforts that benefit communities and honor members of their families. This past year they established an enrichment fund to support the department’s outreach efforts and honor the memory of David Ralston, Tom’s son and Bruce’s nephew. David, who received his master’s degree in the department, was happiest when involved in instruction and outreach efforts.

“The David Ralston fund has been a boon to outreach efforts of Mike Camponovo and myself,” says Kurt Butefish, coordinator of the Tennessee Geographic Alliance. “For example, earlier this year we were able to travel to Nashville to present at the Tennessee STEM Innovation Network Summit and to set up the augmented reality sandbox and the SIM Table in the exhibits area. During the two-day event, we talked to a majority of the almost 500 teachers and school administrators in attendance. That conference allowed us to introduce geospatial technologies to a large segment of the K-12 education population that we had not reached in the past.”

The outreach fund is not the only way in which the couples have honored loved ones and supported geography’s mission. Together they have funded awards for the outstanding primary and secondary school geography teacher awards. These awards, administered by the Alliance, are the Beverly and Mullane Awards, named after two of Tom and Bruce’s favorite aunts and uncles (both uncles were career educators). In addition, the Ralston’s have also funded awards for the outstanding undergraduate and graduate student in GIS. Tom also established the James and Catherine Ralston Family Endowment, which supports the efforts of a professor in GIS. That position is currently held by Professor Shih-Lung Shaw. Finally, Tom’s wife Janet has been a most generous supporter of the department.

“It is nice to see our outreach donations having an impact in the greater community,” Tom says. Both couples receive reports of the various activities their donations have supported and are pleased at the outcomes.

In addition, the thank you notes from the winners of the Mullane and Beverly awards are much appreciated.

“Education is a gift that knows no bounds, much like the blessings our loved ones have bestowed on us,” Bruce says. “Honoring those who have touched our lives through gifts to education is both appropriate and gratifying.”