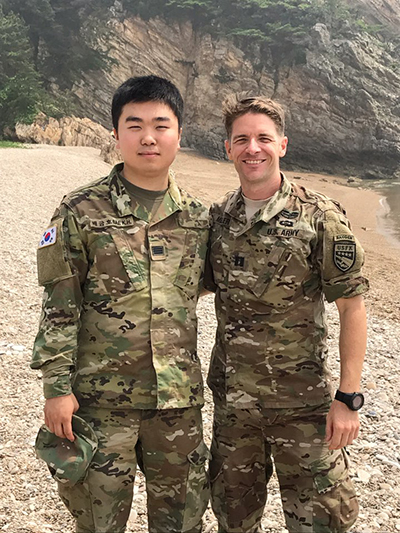 For more than 60 years, the United States has maintained one of their strongest alliances with the Republic of Korea (ROK, commonly referred to as South Korea) in a constantly evolving and strategically complex region. This alliance also supports one of the strongest economies in the world. Developing and sustaining that alliance is no small feat, with an average of 20,000 United States service members and their families, as well as a host of civil servants living side-by-side with Korean citizens in communities throughout the country. In the current era of elevated geopolitical tensions, maintaining and strengthening this relationship is vital to a continuing peace on the Korean Peninsula.

In June 2017, Matthew R. Miller (’17), an army officer and graduate of the UT geography program, was assigned as an operations officer to the Combined and Joint Fires Element (CJFE) of the United States Forces Korea (USFK). In this capacity, Miller works on a daily basis with ROK officers and soldiers, pursuing the USFK Commander, General Vincent Brooks’ priorities of: sustain and strengthen the alliance, maintain the armistice, transform the alliance and sustain force, and enhance the team. In pursuit of these priorities, a strong understanding and implementation of cultural geography is key to fostering teamwork and strengthening the alliance. Implementing skills learned across a broad spectrum of courses and activities offered by the Department of Geography and the UT community has enhanced the multinational partnership within Miller’s individual office. Since his arrival, Miller has spearheaded a plan to provide training in these methods to the larger United States and ROK military communities.

Miller and Corporal Ji Han Choi, an allied ROK soldier educated at Oxford, are writing a paper to be added as a cultural awareness training chapter to the current literature distributed to military members arriving in Korea for the first time. The bedrock of this training are concepts Miller learned from Professor Ron Kalafsky’s Global Economy course and derived through coursework and seminar sessions at UT. It will support and supplement the long-term educational process military members go through while serving tours of duty between one and three years on the Korean Peninsula.

A hallmark of this training is proposing operational models of cultural competence, which help dissect variations in national values of the United States and Republic of Korea. Current methods used by the United States military focus on long-term educational models that require months of training and exposure, whereas receipt and implementation of an operational model can be achieved in a matter of hours of training. Such training does not replace the longer-term educational goals. Due to the fact that many service members arrive between 30-45 days prior to annual joint training exercises, immediate short duration training will help to prepare members for multinational training and provide a base for the continued education they will receive throughout their assignment.

These techniques have already been implemented in individual engagements throughout CJFE. A particularly promising method has been using Hofstede’s cultural dimensions concepts to highlight the way in which Koreans and Americans use their own cultural perceptions when framing and engaging in complex collaborative projects. American and Korean counterparts alike have shown appreciation for the ability to assess cultural dimensions that form these interactions and compare them to their counterparts’ backgrounds.

Miller continues to maintain a close relationship with faculty and student members of the geography department while continuing to pursue publication of his thesis and new research interests. His thesis, “Understanding the vulnerability of the population of Afghanistan under multiple natural and anthropogenic risks with an indicator-based analysis” explores human vulnerability implementing qualitative and quantitative methods.