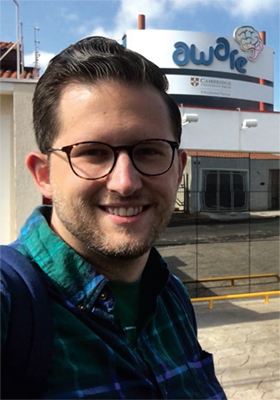 Jordan Brasher is a Tennessean and a Southerner through and through. He was raised in the cypress grove swamp bottoms and under the small-town Friday Night Lights in Milan, Tennessee, where kudzu covers roadside ravines and churches outnumber bars and jobs. He discovered the field of geography during his undergraduate study at Middle Tennessee State University (MTSU), where the curiosity of his youth about the largeness of the world and his place in it began to pique new forms of inquiry and critical thinking. He never thought he’d be writing an article for the department newsletter from Americana, São Paulo, Brazil, in a new kind of south that seems so distant and yet so familiar.

Brasher is in Brazil to learn Portuguese and complete his doctoral dissertation fieldwork. He studies race, place and collective memory, and the controversies and contradictions of commemorating contentious histories.

“I first took an interest in public commemoration during my undergraduate study, though not formally, while MTSU was undergoing a series of heated public debates about the presence of its Forrest Hall, where I took my freshmen algebra class, named for former Confederate General and Ku Klux Klan leader Nathan Bedford Forrest,” Brasher says. “Little did I know at that time my interest in regional identity, racist history, and the meaning of cultural landscapes would have me learning Portuguese in Southeastern Brazil.”

While the debate over Confederate monuments and memorials in the Southern United States and beyond has garnered much public attention in recent years and is part of a long history and ongoing fight for racial justice in the country, few know about the transnational legacy of the Confederacy in Brazil. Americana was founded by American immigrants fleeing the aftermath of the violence and destruction of the United States Civil War. Its founders fought on the side of the South and hailed from states like Texas, Alabama and Mississippi. These people became known as Confederados and their Confederate lineage can still be traced through common last names and on street signs throughout the city, like Cillo, Norris, and Smith. Confederate descendants host an annual party, called the Festa Confederada, every year to honor and remember their family’s lineage.

“I’m here to understand how and why people connect with and celebrate this Confederate lineage in interior Brazil, and how it differs from controversy over Confederate monuments and iconography in the South with which I’m most familiar,” Brasher says. “I’m here to navigate this new kind of South, a region typically associated with industriousness and Latin America’s largest economy in São Paulo.” 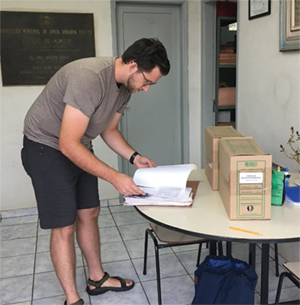 Brasher received a Boren Fellowship from the United States federal government to fund a year’s worth of language study and research that began with an intensive Portuguese summer program in Middlebury, Vermont, and took him to Americana. Boren Awards fund American undergraduate and graduate students to study a wide range of critical languages in understudied areas that are essential to the national security of the United States. Boren Awardees agree to a federal service requirement, which obligates recipients to work in a national security-related capacity for the United States federal government after completing their degrees. 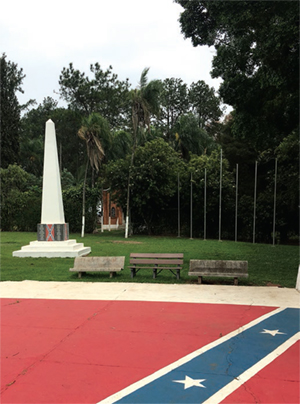 While national security typically conjures images of border protection and international conflict, the Boren Awards draw on a broad definition of national security, recognizing that its scope has expanded beyond these traditional concerns to also include the challenges of globalization that geographers are well-suited to address, like sustainable development, environmental degradation, and global disease and hunger to name a few.

“After the tragic events of Charlottesville, Virginia, in 2017, I made the case that the memorialization of the Confederacy poses internal threats to national security that are often not recognized or represented as such,” Brasher says.

As his Portuguese lessons commence and he tries to move from an intermediate to a more advanced level in the language, he will soon make his first visit to the Cemitério do Campo and Museum of Immigration to recruit Confederate descendants to participate in his research and to learn more about how the Confederate migration to Brazil is represented in different forms of heritage tourism. The peak of his research project will happen in April 2019 during the annual Festa Confederada, and he will return home to Knoxville at the end of June.

“I hope that after I complete my dissertation and PhD I’ll be qualified to use Portuguese professionally to fulfill my service requirement in some branch of the federal government and that my work will inform ongoing debates over and insights into the commemoration and representation of a complex Confederate past,” Brasher says.