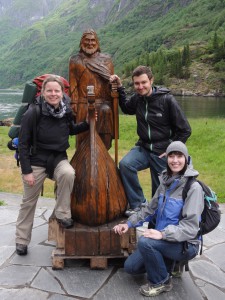 Matt, Grace, and Micheline conducted interviews with, among others, representatives for employer organizations, employees for the city of Oslo, human resource managers, consultants, and human resource managers.  Matt’s trip to Oslo was funded by the National Science Foundation, while Grace received an undergraduate research grant from the Office of Research and a Ready for the World grant.  We all were affiliated with Fafo (Institute for Labor and Social Research) while in Oslo.  Fafo provided excellent work spaces and work environment along with free lunches (including cardamom-flavored waffles on Fridays).

We regularly met for lunch with the Industrial Relations and Labor Market Policy group.  They presented their research project in the first week and received useful feedback from group members. The research team met several times a week to discuss research findings and to set priorities for the upcoming days.  Matt and Grace identified potential informants through Google searches, contacted informants, and participated in interviews.  They also conducted two interviews on their own.

Matt and Grace initially conducted background research on organizers and speakers for the Oslo Global Mobility Forum, a conference that promotes the international recruitment of talented workers to Norway.  Grace later worked on an independent project on the recruitment of foreign-born engineers to Kongsberg, a city located 54 miles southwest of Oslo, while Matt developed an interest in city branding and competition between cities to recruit skilled workers.  Matt and Grace received in-depth training in fieldwork methods, fact finding, literature searches, and interpretation of research results.

The research team also conducted participant observation at events for foreign-born professionals and internally-minded Norwegians.  They presented the research project at one of the meetings of the Oslo International Club to generate interest for the project and to identify potential research participants.

Matt and Grace became adept at using the public transportation system in Oslo and the research team used the weekends to explore the city.  Matt, Grace, Micheline, and Kevin (Micheline’s spouse) visited the museum island Bygdøy, Akershus Fortress, the Edvard Munch Museum, the Nobel Peace Center, and the fish market.  They also took a short trip to western Norway to explore the fjord country.  They took the Bergen Railway to Myrdal, hiked down to Flåm, camped overnight and took a boat trip on the Sognefjord. This was followed by a bus ride to rainy Bergen where Peppe’s Pizza lifted our spirits.

Upon returning to Oslo we continued interviewing informants and collecting data.  The last night in Oslo we had a farewell-party on Langøyene, an island in the Oslo fjord. We grilled food on a one-time grill while enjoying the boats on the fjord.  Upon our return to Knoxville, Grace wrote a report for the Office of Research that she shared with an organizer of the Oslo Global Mobility Forum. She will present her research findings at UT’s Exhibition of Undergraduate Research and Creative Achievement (EUReCA) conference in Spring 2013.  Matt is developing his interests in city branding and city competition into a dissertation proposal, and he will apply for funding to extend his research into Berlin, Germany.