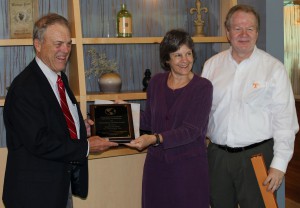 On April 26, 2012, Dr. Neal Lineback, professor emeritus of geography at Appalachian State University and author of Geography in the News and Lineback WorldView, was recognized as the 2012 Distinguished Alumnus of the Department of Geography at the University of Tennessee, Knoxville, TN.  Dr. Lineback earned both his master’s and Ph.D. degrees at the University of Tennessee (M.S. 1967, Ph.D. 1970). Of all of his many achievements in scholarly research, teaching, and service to the profession, two were given special mention: establishing and guiding the World Geography Bowl, now a tradition of the annual SEDAAG and AAG meetings, and initiating and writing over 1100 columns for the news column, Geography in the News.  Carol Harden, head of the Geography Department noted that all geographers have benefitted from Lineback’s outstanding promotion of geography as a profession and that all Americans benefit from his extraordinary efforts to increase geographic knowledge and understanding of the geography of current events.

In his inspiring remarks to students and faculty of the UT Geography Department, Professor Lineback emphasized the importance of taking deliberate steps to overcome challenges, collaborating with peers, and being open to new possibilities.  The 2012 Distinguished Alumnus Award to Dr. Lineback was only the third such award bestowed by the Department.